Soccer legend David Beckham thinks that Indonesia has the potential to own great talent in soccer, but the country is a tough place in which to play the sport.

Beckham, 42, said he comes from a country where playing soccer is a common activity for every child.

“We aspire to be a hero — and that’s how we’re brought up,” the Englishman told the press in Jakarta on Monday. “But here, it is a tough place to play football,” he said, adding that the country still lacked infrastructure and investment to support the growing of the sport.

Nevertheless, the former star of world-class clubs such as Manchester United and Real Madrid believed that most European players would find it a big challenge to play against Indonesia’s talent.

“[Indonesian players] are tough players. They have good quality. I believe once the infrastructure and investment are here, and more coaches have the ability to coach these young talented kids, they’ll have a great future,” he added.

Beckham, the former captain for the England soccer team, spent a few hours with hundreds of children at Sumantri Brojonegoro Stadium in Kuningan, Jakarta, on Sunday as part of his duty as the global ambassador of insurance company AIA.

In Sunday’s activity, which promotes the “What’s Your Why” campaign, Beckham interacted with the participating children as well as donated 10,000 soccer balls for Indonesia on behalf of the company. 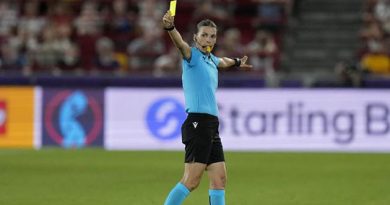