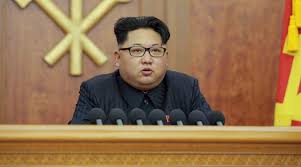 North Korean leader Kim Jong Un will be eyeing closely what Donald Trump decides on the Iran nuclear deal, with potential repercussions for their upcoming summit, according to China’s former ambassador to Pyongyang.

“The DPRK is watching,” said Liu Xiaoming, China’s current envoy to the U.K., who served in the Democratic People’s Republic of Korea from 2006-2009. “If you walk away from a deal agreed to by your previous administration, it will set a bad example.”

Chinese President Xi Jinping met with Kim over the past two days, the second meeting between top officials of the allies in less than two months.

Liu reiterated China’s support for the 2015 deal, which suspended Iran’s nuclear fuel program in exchange for a relaxation of economic sanctions. Speaking in an interview in Bloomberg’s London office, the veteran diplomat said China hoped a consensus could be maintained to keep the agreement alive, adding that dumping it would be a “setback.”

The U.S. signed the deal under former President Barack Obama along with Iran, China, France, Germany, Russia and the U.K. Trump has consistently attacked it, saying it doesn’t do enough to address threats from the Iran’s ballistic missile program and its involvement in regional conflicts. He’s expected to announce at 2 p.m. Washington time if he plans to withdraw U.S. support.

Iran has threatened to pull out, too, if that happens — raising the prospect that it could ramp up its nuclear enrichment program again. Tehran had been within months of a so-called breakout — the point at which a country can produce a nuclear bomb — in 2015, according to analysis by The Washington Institute.

As the representative of North Korea’s most important economic and trade partner, Liu had rare insight into the isolated regime at a time when a previous international deal aimed at restraining that country’s nuclear ambitions collapsed. Pyongyang tested its first nuclear bomb in 2006, and is now thought to have dozens of warheads. The testing of ballistic missiles last year that North Korea said were capable of reaching the U.S. brought the issue to a head.

“When it comes to North Korea, based on my experience, there will always be two steps forward and one step back. Sometimes one step forward, two steps back,” said Liu, asked if the regime could be frustrating to deal with.
Still, while a recent summit between Kim and South Korea President Moon Jae-In wasn’t unique (two under previous leaders had limited long-term success) this time is different, Liu said, because the U.S. is engaged at a much higher level. In Liu’s day, U.S. contact with North Korea was at the level of assistant secretary of state or ambassador — Trump would be the first U.S. president to meet a North Korean leader since the end of the Korean war in the 1950s.

“We will try to do our best to make sure people are talking, rather than resort to what we call a risk cycle of retaliation; we are looking for a virtuous cycle,” said Liu.

That kind of lengthy diplomatic crawl may not satisfy Trump. He has attacked previous U.S. administrations’ efforts to negotiate incremental deals with North Korea as flawed — and none of those were as tough or intrusive as the deal with Iran. His new secretary of state, Mike Pompeo, said he doesn’t think North Korea is overtly concerned about whether the U.S. withdraws from it.

“Some people say there are so many unpredictable leaders in the world today,” Liu said. “So we have to be careful with predictions.”